The Prophesy of Blood

The Prophesy of Blood.
The Graveyard.
Her young face was muffled in something horribly soggy. Lying face down, her aching body was flat out. As Lavender slowly came to her senses she raised her head a fraction, careful not to attract any unwanted attention.
Dark, it’s so dark she thought as she shivered, maybe from the cold seeping into every corner of her being, maybe from the sight that met her eyes. A gravestone.
As she slowly read the carved words on the weather beaten limestone another shock wave flowed down her spine, this one definitely not caused by the cold or damp. Some of the words she couldn’t read, but others she could clearly make out.
Here lies...Blake
Beloved daughter of Theo, sister of Daniel
Rest in peace.
Sssss.

The inferno of the Hellion
Ba-bam...ba-bam...ba-bam..ba-bam..ba-bam,ba-bam,ba-bam,ba-bam! The beating heart of Lavender Blake pounded ever harder. Faster and faster, harder and harder, beating so loudly that the imperceptible sound was drawing the beast closer and closer to her location. A hunter closing in on its prey. Lavender Blake was that prey!
“Hh...Hh...Hh! She panted as she struggled hard to move the dead weight, “nearly...there!” Lavender hauled the body of her friend further and further, “HELP ME WITH VIBIUS WILL YOU SIGGI!” She screamed over the noise of the rising molten tide.
Ba-bam...ba-bam...ba-bam..ba-bam. Even though she was screaming and there was noise all around her it was her heartbeat that was acting as a homing beacon.
Flames devoured what little oxygen was left making the twelve year old gasp for breath. Blackness surrounded the small group of mismatched characters as a flood tide of fear enveloped them.
“I can’t do it!" Whined Siggi pathetically, “I’m just a girl! He’s too heavy!”
“You’re an adult, Siggi,” snapped Lavender, “a full grown woman! Oh! Just get out of my way!” Lavender continued to heave her friend along the ground, “just...one...more...pull!"
Ba-bam...ba-bam...ba-bam..ba-bam.
Things were made much worse by the heavy plaster cast on his ankle digging into the ground, ploughing deep grooves in the floor, “there!”  Gasped Lavender finally.
Lavender’s body desperately craved rest but the island in the sea of fire was getting smaller and smaller as the level of the molten liquid rose ever upwards pushing her, Siggi, Vibius and Casiopia further towards the highest point. Casiopia’s wings had been singed so badly that she could no longer fly, Siggi was worse than useless and Lavender’s strength was being sapped by constantly having to pull her unconscious soldier friend to safety.
Ba-bam...ba-bam...ba-bam...ba-bam.
“Lavender!" Yelled Casiopia pointing, “look!"
The intrepid reporter, Siggi, had a small camcorder in her hands and she was busy filming everything.
“Do you ever put that thing down?" Barked a furious Lavender.
“I’m a reporter, Lavender!" Siggi Clements argued, “I record things, then I tell the world!”
“There might not be a world left to tell soon!” She replied.
“Lavender,” Casiopia was still pointing, “LOOK!"
Ba-bam...ba-bam...ba-bam..ba-bam.
Vibius groaned in agony as Lavender pulled him towards Casiopia and stood between her friends and the lapping tide of white hot heat.
Ba-bam...ba-bam...ba-bam..ba-bam. Her chest was going to burst open!
“What on..." Lavender whispered as she looked out over the sea of magma and saw the waves slowly parting. Quickly, she fumbled in her deep pocket felt the wand and held it aloft trying desperately to remember the spells her friends had taught her. Lavender had only ever used the magic before for lifting stones and making doors invisible now she was expected to use it to fight to save lives, maybe many lives and definitely her own!
Now what was it? She thought impatiently, racking her brain what was that spell ? But her mind had gone blank and everything she had learnt seemed to have just disappeared into the dark night like everyone and everything she loved.
As Lavender Blake searched her memory for the magical words a colossal, monstrous head slowly rose from the liquid, metal fire dripping as it emerged. The tips of its ears appeared before the unblinking, demonic eyes. Pointed ears, sharp enough to cut through stone, no nose just holes that oozed slime, a mouth full of narrow razor sharp teeth and eyes as red as the deepest sunset were staring straight at Lavender.
BA-BAM...BA-BAM...BA-BAM...BA-BAM.
“No!” Gasped Lavender banging the wand against her leg in frustration, “work you stupid thing!” She pointed her wand in desperation.
“It’s no good, Lavender," sighed Casiopia wisely, “your magic is child;s magic, you’re not powerful enough! It’s all over now! You can’t resist it, no one can! The Flaming Hellion is the harbinger of the end of the time!”
“What?” She replied then something caught her eye, “OH NO! It can’t be!" she screamed  pointing.
The birth of the Flaming Hellion marked the culmination of the prophesy of blood, the prophesy of the blood ties of Lavender’s and her sibling, for trapped behind the teeth in the cavernous demon’s mouth was Daniel Blake, Lavender’s twin brother. Soon the beast would have Lavender too. Then it would be too late!

Earlier that night - An eye at the bedroom window.
Posted by Rob Bullock at 17:03 No comments:

Sam Marsh: The Battle of the Cloudships pre-release

http://sbpra.com/RobertBullock/
Posted by Rob Bullock at 13:24 No comments:

The books I use for school visits. 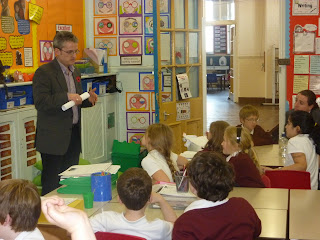 Just finished Jacob's War! It's taken over two years to plan, research and write! 57,000 words! I'm so pleased with this story and have even thought up a new Jacob story! Though I'm sure that will involve a lot of planning and research also.
But in the meantime I've two new novels for teenagers to finish, a major new project to plan and research, some new Noah Ramsbottom stories to work on and a new story about a tarantula who visits a family for Christmas to complete for my younger readers!
I hope to publish excerpts from Jacob's War on this blog over the coming weeks. 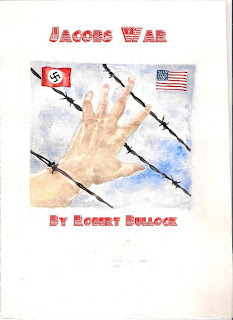 www.ninnylizard.com
Posted by Rob Bullock at 16:53 No comments: 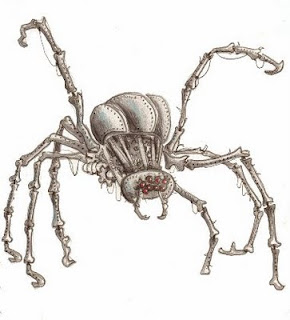