Littleplod's lie in and the boing, boing shoes.

Littleplod's lie in and the boing, boing shoes. By Robert J Bullock 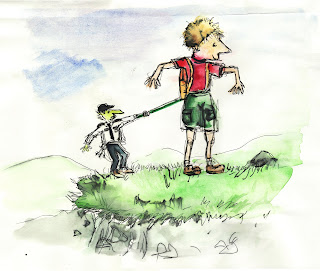 The cave guard, Littleplod, was tucked up snug in his little elf nest. Elves don't have beds like human people. They have little nests made of cushions, pillow, blankets and sheets. Each night they curl up tight in the pile of bedding and go to sleep. But before he goes to bed at night Grandma Crinkleplod always reminds Littleplod to wind his alarm ticktock up, but, as Littleplod hates doing as he is told, he always refuses! So if Grandma Crinkleplod ever forgets to wind the ticktock herself, it ends up stopping in the middle of the night. This is what had happened this morning.

"Littleplod!" called Grandma Crinkleplod from her kitchen as Littleplod’s brothers and sisters were disappearing off to work and school.

"What!" mumbled Littleplod rudely. Littleplod didn't like being woken up. He was a grumpy box in the morning.

"Do you be awake, Littleplod?"

"No! I be SLEEPING!" Roared the angry elf.

"You be late for work!" Warned the old elf.

"I be my own boss!" He shouted rudely. "No-one be telling Littleplod when to start! I be starting when I be wanting!" And with that he burrowed deeper into his nest and went back to sleep.

"Whatever you be saying," said Grandma Crinkleplod calmly, shaking her head.

At ten o’clock there was a loud banging on Littleplod’s bedroom window. All cave elves live in small burrows hollowed out of cave walls. Littleplod's bedroom was on the second floor of the burrow.

"What?" Shouted an angry Littleplod from under the covers.

"What be you doing, Weenyplod?" asked Littleplod peering out of his window.

"Be stopping boinging!" screamed Littleplod as loud as he could.

Weenyplod had huge springs under his red shoes, and every time he landed he bounced straight up again.

Quickly, Littleplod threw on his cave guards uniform, ran down stairs and outside. The only way Weenyplod could stop bouncing was by crash landing on his back! And as Littleplod opened the door his cousin was lying flat staring up at the sky!

"What be so urgent?" yelled Littleplod, furiously.

"What be Mole Robots?" Asked Littleplod.

"Never heard of them!" Declared the Cave Guard.

"They be attacking the magic cave from underneath!"

"But what can I be doing? I be just the cave guard!"

"Boingboing shoes!" Grinned Weenyplod passing his cousin a pair of the bright red shoes with the gigantic springs underneath. "Be putting on, please!"

Reluctantly, Littleplod did as he was asked. At first he could barely stand up in the strange shoes. Then when he started bouncing he found he could easily jump quite a height. He discovered that instead of trying to walk he just had to bounce with both his feet together.

"Be following me!" called Weenyplod who was now something of an expert at using boing, boing shoes, apart from when it came to stopping, of course!

The two elves bounced through the magic cave and out of the entrance where Littleplod should have been standing guard. Just down from the magic cave was a large, grassy ledge and burrowing up through the ground were strange, evil looking, mechanical mole creatures! They had big shovel-like hands, one yellow eye in the middle of their face and sharp looking teeth.

Obviously sent by some enemy of the cave elves, maybe the Furglegurgles, to attack Victoria Cave, ten of the horrible mechanical creatures had appeared. As they came through they started bombarding the cave with large bits of soil.

"Oh, no!" yelled Littleplod as the elves in the cave took cover, "what can we be doing about this?"

"I have a plan," squeaked Weenyplod.

"Be bouncing on their heads!" Yelled Weenyplod as he bounded down the steep path towards the horrible machines.

"Be bouncing on their heads?" Argued Littleplod, "but that be dangerous!"

But Weenyplod was already bouncing towards the Mole Robots.

"Oy! Be waiting for me!" replied Littleplod following his brave cousin.

Weenyplod and Littleplod were quickly down on the grassy ledge and were bouncing between the mole machines, jumping on them and making them go back underground. Two, boing, four, boing, six, boing, eight, boing, ten, boing! Gradually every one of the Robot Moles were pushed back underground. For good measure, they bounced all around the ledge after the last of them had disappeared until they were finally satisfied that they had gone for good.

"Littleplod!" A lady's voice echoed from the cave entrance.

"Oh, oh!" said Littleplod bouncing up the path, "Miss Bagshot is looking for me, I need to be going and guarding the cave, ooh, ooh I be in trouble, I be late!"

Littleplod bounced and bounced, faster and faster then suddenly he bounced really hard, lost control, bounced on a wobbly rock and flew like a rocket backwards over the ledge! He landed on his back with a heavy thud!

“Ow!” he mumbled quietly, rubbing his very sore head, “I think I should be listening to Grandma Crinkleplod from now on! Sleeping be not a good idea!”