Excerpt from Sam Marsh and the Battle of the Cloudships

Excerpt from Chapter 25, Sam Marsh and the Battle of the Cloudships.

“Grasshopper to Wheat sheaf, come in Wheat sheaf!” This time there was a crackling sound coming over the radio.
“Wheat sheaf to Grasshopper, I can confirm that we have you on visual, prepare for the tractor beam to tow you home!”
Hellman quickly took his hands off the flight controls and sat motionless, waiting.
“Grasshopper to Wheat sheaf, it’s all yours, bring us home.”
Even before Hellman had stopped speaking the controls of the chopper had been seized by something from outside the vehicle and the helicopter was being slowly manoeuvred out of her hovering position. She was pulled higher and higher into the sky. Silently, the engines of the Russian built chopper were switched
off remotely, but instead of crashing back down to the earth the machine kept rising higher and higher out towards space itself.
Hellman sat calmly watching the altimeter work its way gradually higher and higher. 60,000 feet, 65,000, 70,000, 75,000. Had the inside of the aircraft not been pressurised the passengers would have been frozen as the temperature outside had dropped well below minus forty degrees centigrade and dropping rapidly.
Finally, as the altimeter reached precisely 80,000 feet the chopper stopped climbing and instead started edging slowly forward.
As Hellman peered out of his windscreen he could just about make out some bright lights about two miles ahead of them. Slowly, as they got closer and closer the lights got brighter until the pilot could clearly make out a flight deck.
“Please fasten seatbelts for landing,” said Hellman into his intercom, before he checked his own belt.
But he needn’t have worried, everything was under complete control. The large helicopter was dragged slowly and smoothly into the large flight deck of Cloudbase 1 and the huge external doors closed silently behind them. Grasshopper was pulled further and further into the large hangar and then she was placed gently down onto the runway. 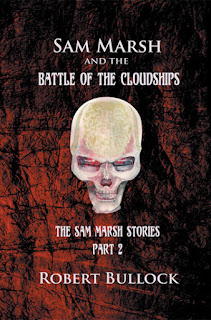