NEW & EXCLUSIVE! To celebrate the brilliant 2012 London Olympics a four part Noah Ramsbottom story Noah Ramsbottom at the 2012 Olympics! Published in four parts with brand new illustrations over the course of the games!

“Heehee! Heehee!”
“What was that noise?” Mumbled Noah to himself as the huge crowd all around him chattered excitedly.
“Heehee!” There it was again.
“Did you hear that, Mum?” Asked Noah.
“What, Noah?" Replied Mum, there was lots of noise as the entire stadium enjoyed the track and field games of the London Olympics.
“That...err...chuckle," replied Noah slowly.
Mum shrugged, “chuckle? I suppose I can hear a lot of people chuckling dear, everyone’s having so much fun. Isn't this wonderful?"
“Mmm,” replied Noah, he’d heard that chuckle before but couldn’t quite remember where.
Noah Ramsbottom and his mum and dad were in London for the 2012 Olympics, and were feeling really lucky to have tickets to watch the athletics on the night of the 100 metres final. Everyone was really looking forward to seeing Usain Bolt in action. It was less than 30 minutes until the final and everyone was getting so excited!
“Heehee!” There it was again.
“Ice creams!” Called out the squeaky voice of a seller as he wandered up and down the steps of the stadium, he was approaching where Noah was sat, “Ice creams! Does anyone be wanting ice creams!”
“Wait a minute!” Noah turned to face the seller who was very short indeed, “I know that voice!”
The man had a long white coat on that dragged along the ground and a large baseball cap much too large for his head which was falling right down over his eyes.
“Oy! Does anyone be wanting ice creams!"
“Me!" Noah stopped the seller, “I want one please."
“Pssst..." whispered the seller as he passed Noah a Cornetto, Noah noticed his hands were green, “it be I, Littleplod,” whispered the seller.
“I knew something was wrong!” Whispered Noah looking all around to see if anyone was taking any notice of them, thankfully everyone was too busy watching the games.
“Oh yes, something be very wrong Noah Ramsbum! But Littleplod not be the problem, the
O’Plods be the problem!” Replied Littleplod.
“The O’Plods?” Noah was shocked, “they’re here? Why?"
“They be here Noah Ramsbottom and they be planning mischief!" Said Littleplod before adding, "they be planning something big!"

“Hee-hee!” Giggled Cormac O’Plod, one half of the O’Plod brothers, who were Gurglespink Leprechaun’s from County Fergusbotherbetrouble, “the plan be looking fantabuslous Seamus!"
“Hee! My plan, you mean Cormac," replied Seamus. The O'Plods were always agruing.
“Hee-hee! Does it be mattering Seamus?" Snapped Cormac “have you been swapping the starter gun, Seamus?"
“Hee-hee! I be swapping it, Cormac," replied Seamus, who like his brother was wearing a tall green hat with flowers growing out of the top. But because so many people were in fancy dress they didn’t look out of place at all!
“Hee, and it be loaded with Dick Pricklehedge’s shrinking powder, Seamus?"
“Hee-hee-hee it be loaded, Cormac!"
“Hee-hee-hee-hee! Soon Usain Bolt will be becoming Usain Mini Bolt, Seamus!" 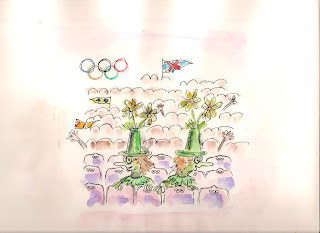